A downloadable game for Windows, macOS, Linux, and Android

What happens when a Presidential backup plan goes awry...?

Charles 2.0 is a short Visual Novel created entirely in a month for NaNoReNo 2019. This game features:

Charles 2.0 was created by Team Conwolf: Bob Conway on writing and GUI, and Wolfscade on sprites and CGs.

This game contains sexual content involving gay men, so you should ensure you are of legal age to view adult material in your area. Explicit text and censored CGs are turned on by default. Adult content can be fully disabled under the game's preferences.

I love this game, thank you for putting so much effort into it :).

I just wanted to let you know that I came across an error in the new android version. It's nothing major but I thought I'd share the screenshot with you in case it might help.

Cheers and thank you again for creating this game! 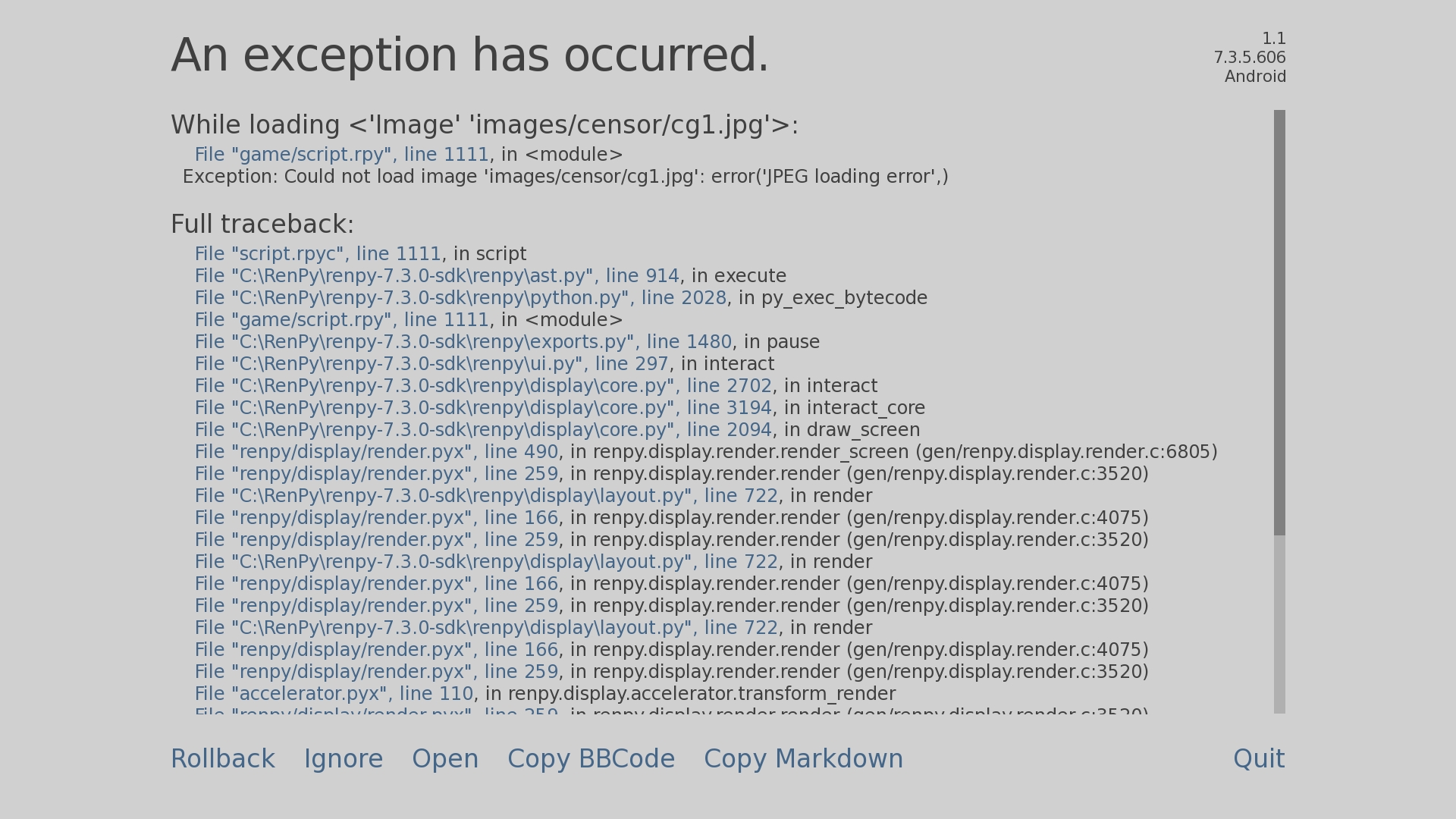 Ahhh, thanks. I'll get that fixed. Hopefully you're able to just Ignore the issue and continue playing successfully?

Should be fixed now, but I don't have Android and so can't test it myself.

Thanks for the bug report!

I liked it, was very good, but how do I unlock the squares with the question marks under the ending list?

Those are the CGs, and you unlock them by seeing the CGs during gameplay. (If you have censored mode turned on, you won't unlock them, as they are NSFW CGs.)

I had it turned off

then again I gess it did still sensor the penises, so maybe it bugged and kept it turned on even though I had turned it off

Interesting. No, censoring shouldn't matter for unlocking them.

I'll have to check, but last I knew, the unlocks were working correctly.

A game has interested concept and it's quite fun. Unfortunatly, it was too short and the goal of attack still didn't clear. It would be better if you continue making this game longer and improve the story. Even it's no longer free, I would defienty pay for it.

Thanks for the comments and for trying the game out.

The game is intended to take a couple times through before you understand the "right" answers, since you have to understand Charles' personality to be able to make the correct choices.

Given it was a nanoreno (gamejam) game, there are no plans to expand it further.

Thank you for trying the game and for your comments, and I'm sorry it wasn't up to your expectations.

For future reference, there's a setting in preferences that allows you to disable sex scenes, as also noted on this game page under the warning about explicit gay sexual content.

When is the uncensored patch or apk going to be available for android?

There are, unfortunately, no current plans to release an uncensored Android version.

It's a little too short for my taste, but it's still worth a play.

The catalyst ending made me tear up, I admit.

Glad you enjoyed it!

We aimed more conservatively for the size because it was a month-long jam and I was travelling for part of it, but it turns out we probably could have done something longer.

Yeah, but despite how short it was, it was done so well I look forward to future games from you.

Depending on what aspect you liked, you might enjoy my previous game YAGS? It's significantly longer (230,000+ words), but it's less about plot and more about developing friendships with other characters in relatively mundane interactions. (It's very much a slice-of-life game.)

If you liked the art, Wolfscade has another collabration "Blood and Lust" with Ertal Games that is a bit longer than Charles 2.0.

I tried YAGS, but it wasn't really my thing. I think the art style was the most off-putting thing to me. I may try it again later and try to get past the art. It's not bad, just not my cup of tea.

Some games have horrific art but lovely plots.

I liked EBAE, but again it was a bit short for me.

Personally, I like building relationships in most games; In other words, no sex right off the bat lol. However, some of those have a nice concept to them.

In Charles 2.0, the sex made sense to me because the relationships were pre-existing.

I don't expect you to compromise your vision of your games based on my own opinions, either. Regardless of preference, I've enjoyed most of the ones you've done.

Also, I have Blood and Lust that I'll be playing soon.

The art is very good. But I can only achive the endings when he dies, kind of sad.

Bobcgames posted a walk-through if you want to get the best ending if you are interested:

Also, to be fair, you die in five of the six endings, so that's not so unusual.

That was really fun and the art is gorgeous. Is there a way to hide the text box? I'd love to take a screenshot without it.

If you hit the "h" key during gameplay, the textbox should go away until you either hit it again or click/spacebar to continue.

Thank you very much, that works perfectly fine.

How can you do better in the press conference. She only only said "it didn't go that bad"

When asking questions to Dana at the beginning, focus on attack-related questions (so you have better answers for the questions that the reporters ask during the press conference). Charles usually errs on the side of providing too much information, so the more factual your answers, the better they'll go over with the press.

Note that new questions may show up during your conversations with Dana based on what you've already picked. So visit a menu again even if you think you've already selected all of the relevant things in it.

(Dana is also pretty good at letting you know what items are relevant to the upcoming press conference.)

An indication that you're doing well during the press conference is that Charles will raise his hand in an apparent thumbs up.

Charles is so fucking hot! Wolfscade did a great job. I really liked the artstyle.

Anyway, I need help unlocking the last ending and cg. I completed all endings except that one and I have no idea how to do well with Lorenzo. I think I did really well with the press conference (Dana said "That wasn't so bad") and I stayed like 30 minutes trying to do well with Lorenzo without success..(Yeah I always ask to help me to Dana at the end) Can you please post a full walkthrough or tips? I really like the game and I want to see the final cg.

For the final ending, you need to do well in both the press conference and Lorenzo conversation, and then accept Dana's offer at the end. Remember that Lorenzo likes when you're brutally honest, but he also appreciates when you remember important events from the course of your relationship.

I finally got it thanks :D

This was fun! Very short, but a major accomplishment for Nano. I loved the art and the dialogue all felt very real. It was a very interesting concept too, I'd love to see this explored in more detail. Congrats on getting it out for nano!

Thank you! I'm glad you enjoyed it.

This is relative short, but damn the aftermath of shock and sorrow are lasting :'(

We're glad you enjoyed the game, even if it was sad at the end.

There is an ending that isn't so sad, if you do really well throughout the entire game...

the nudity patch works on android?

It does not, unfortunately. You have to play on a computer if you want full nudity.

You need to do really well in both the press conference and the conversation with Lorenzo afterward, and choose to help at the end when Dana gives you the choice.

Focus on questions about the attack itself during questioning, and remember that Charles is blunt (almost to a fault) with his interpersonal relationships as well.

Loved the game, definitely keep up the good work man, the story, gameplay and art style were fantastic! (P.S. is there any way to turn off the censoring though?)

Although I'm having problem getting the last ending. Hints?

You need to do really well in both the press conference and the conversation with Lorenzo afterward, and choose to help at the end when Dana gives you the choice.

Focus on questions about the attack itself during questioning, and remember that Charles is blunt (almost to a fault) with his interpersonal relationships as well.

Thanks I got it! Wow I would've make for a lousy president that I keep failing the press conference lol.

A fantastic game! Congrats on getting so much done in such a small amount of time!

Thank you! I'm glad you enjoyed it! 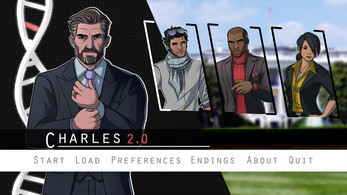 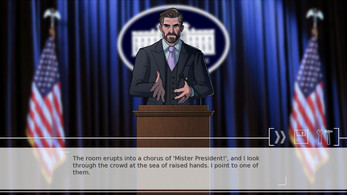 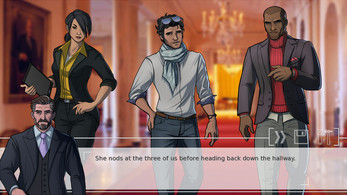